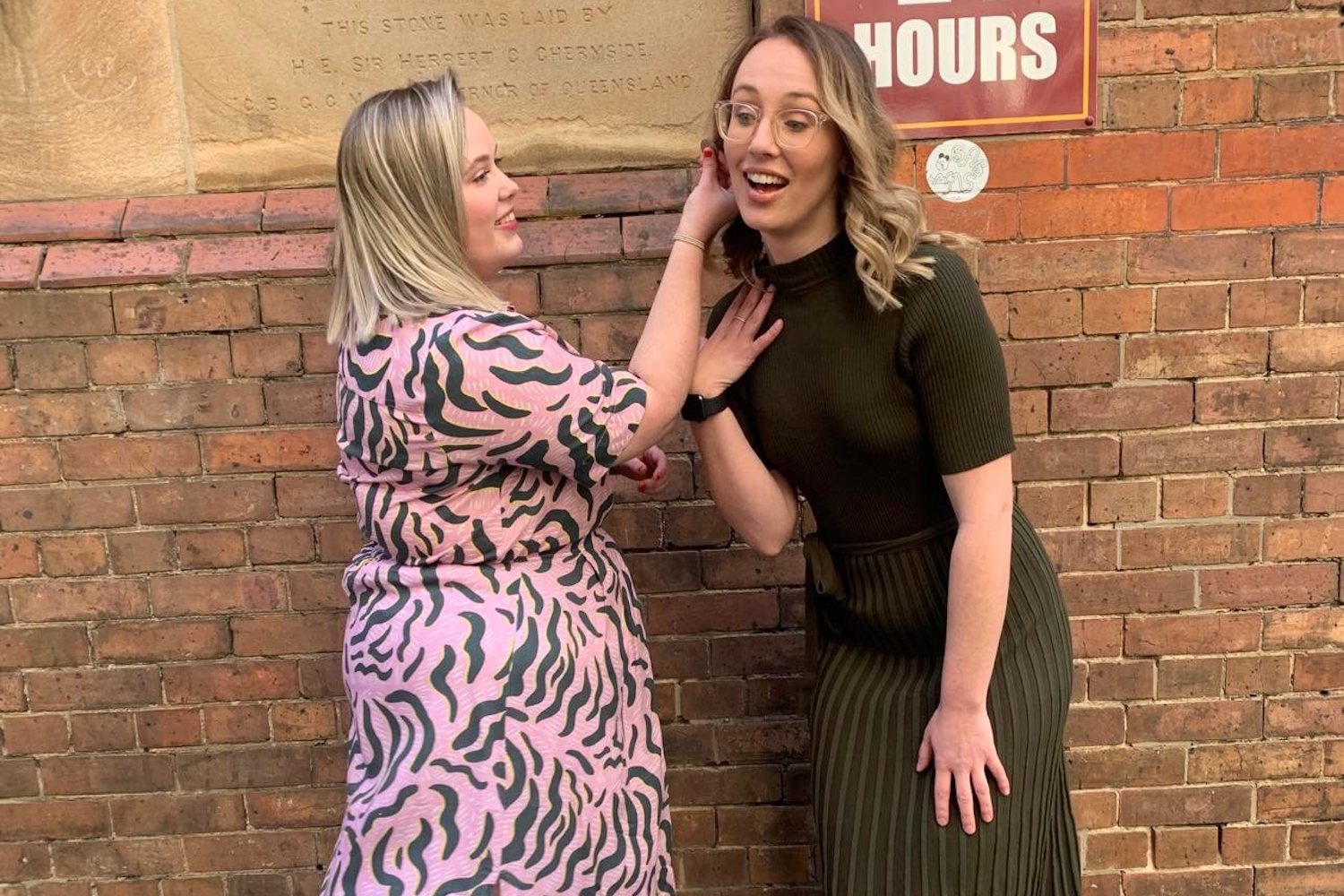 Well, we truly can’t believe it! It’s been four months since we officially launched What’s The Stack – Season 1. We’re not sure about you, but we have watched (and rewatched) What’s The Stack several times – that’s how many juicy insights our incredible guests gave! We still can’t believe that we got to speak with seven of Brisbane’s best and brightest tech personalities AND that we got to do this over seven stacks of pancakes AND that we still like pancakes. The best news is – every time we watch it, there are new insights to be learnt.

As Brisbane tech recruiters, every day Emily Conaghan and Carly Shearman ask the question – “What’s The Stack?” and now, they’re bringing that question to life as they ask some of our favourite technical friends about their own tech stack all while enjoying stacks of pancakes in Brisbane’s most iconic church turned 24/7 pancake restaurant – The Pancake Manor!

Haven’t had a chance to binge-watch the first season yet? Here’s your opportunity: https://youtu.be/RjE0zBeDkX8

Here’s seven new insights we learnt from Season One of What’s The Stack:

When it comes to making a career move, know what is specifically transferable about YOU.

Adam Skinner, former-CTO and now-COO of CitrusAd sat down with us to dive into his career over a stack of waffles.

For Adam, his career so far has been particularly squiggly AND interesting. Adam’s career started in hospitality where he was managing venues before making the transition into hospitality tech. Now, as the COO of CitrusAd, Adam is taking on a zesty new challenge as he grows and builds out the CitrusAd tech team during an exciting time for the company – with global expansion, monumental growth and their recent acquisition by Publicis Groupe.

When looking at Adam’s career to date from an aerial view, he’s had a clear long term focus on a particular industry, before moving on to the next. And what is unique about Adam is his ability to focus on the transferable elements in his skillset. Firstly, when it came to making that initial leap from hospitality to technology, Adam focused on his knowledge of hospitality to make that jump a reality. Then, five years later when making the jump into health and fitness tech, there was a clear connection between the hospitality end-user and the health and fitness user – the customer. Adam’s experience working in customer-centric environments (and environments where time is money!) made this an interesting transferable skill. Finally, in his most recent career transition from Fitness and Lifestyle Group to CitrusAd, Adam understood the clear transferability of his experience with marketing integrations on the Fitness and Lifestyle Group associated websites.

The lesson here: Taking an audit of your skills, experience and the niche elements of your role and who you are may open up doors that you didn’t know were possible.

There is a place for you in technology!

Carlie Hamilton’s career journey has taken twists and turns from starting as a substitute high school teacher, teaching English in Japan, going on to retrain as a developer, and now to taking on the very enviable role of Software Developer at none other than Atlassian!

What we know about Carlie is that she’s passionate about pushing the boundaries of what a career in technology looks like. Carlie is an active member of the Brisbane tech community and a fierce advocate of the fact that no matter who you are, there is a place for you to have a career in tech!

Carlie’s story is one that does a 360-degree turn around a roundabout. Coming straight out of high school, Carlie started a Bachelor of Communication Design where she was learning front end development practices. Feeling as though the environment wasn’t for her, Carlie pivoted towards a career in teaching only to pivot back into software development after studying at Coder Academy. In her second foray into technology, Carlie learnt that the experience that she had as part of the Communication Design course wasn’t a reflection of what a career in tech could be like. Carlie immersed herself in the Brisbane tech community and soon enough found her place and is keen for everyone to know that there is a place for anyone in tech!

Sorcha Abel is a Software Engineer at Culture Amp and in 2020, she was named the Technical Leader of the Year at the Women in Digital Awards! 🎉  Sorcha is also an active member of the Brisbane tech community, giving her time to NodeGirls and CoderDojo – just to name a few.

Sorcha’s attitude towards respect is one that isn’t uncommon, but the great thing about Sorcha is that she takes on respect with a business mindset. It’s not something that you earn, it’s something that you get from the get-go. Having respect as an expectation within your team will promote openness in communication, ultimately resulting in more collaborative environments where ideas are valued, heard and brought to the table.

When he’s not at his day job as a Software Developer at Tanda, Lachlan Young is providing mentorship in many pockets of the Brisbane tech community including in his role with She Codes Australia as the Brisbane React Lead.

Lachlan started his tech training in Game and Interactive Media Design and following graduation, decided to pivot towards a development career. This meant that Lachlan has become a self-taught developer.

From his experience, we’ve learnt that when building a career as a self-taught developer; you have to back yourself and back the knowledge that you know you have. When you’ve received tertiary training, you can lean on the idea that a higher power (perhaps, a university board for example) has designed a course with the end result of you having a career in tech in mind. When it’s just you, you need to back yourself, your knowledge and your skills. You can do it!

Prototype purposefully – because if it’s good, it might be released to users’ quicker than you expect!

Teena Glassick is currently the Director of Support Engineering at Skedulo and we think she has a super interesting career!

Starting out with a career in science, Teena navigated through a number of research roles, a pivot into development and now has a very impressive career in engineering leadership.

We almost needed to write a novel with all of the insightful takeaways we have from our conversation with Teena. She is brilliant, knowledgeable and incredibly open about sharing her learnings.

During our chat with Teena, she discussed her biggest tech fail was when the team had built a proof-of-concept that got legs and ran off before their very eyes. A keen developer built a standalone prototype to solve a singular client’s problem and the Product Owner was so excited that they sold the prototype many times over to other customers. The problem? It was just a prototype and was by no means ready for production. It took the team a long while to recover from decisions made when building the Proof of Concept and then having it shipped.

The key learnings? Prototype purposefully! It’s a reminder to slow down, do the groundwork and try to make decisions with the longer-term vision in sight.

Be curious and interested in the product you’re developing.

Nikki Williamson’s career is incredibly impressive, having started as a Junior PHP Developer under a decade ago, to now being a Group Engineering Manager at one of Australia’s fastest-growing crypto platforms, Swyftx.

The relationship between being invested in the product and your success in a development role was such a killer insight from Nikki. When we speak to candidates about what’s important to them in a role, it’s also key that we discuss the types of industries or companies they’re wanting to work in. There’s no point finding someone a role in mining when all they want to do is work in eCommerce. Having the ability to step into the shoes of your user is super important not only to the business but to your enjoyment and experience in the role!

Nikki spoke about the importance for all developers to get out of the codebase and interact with the website/product as a user would. It is such a simple idea, but with far-reaching impacts (and you may be surprised to know that it isn’t something that everyone does!).

The biggest mistake you can make as a leader is to burn out your team.

Our final guest for What’s The Stack – Season 1 was none other than Rexlabs’ Head of Engineering, Scott Warren.

What we love about Scott’s career is that he adds another feather in his cap everywhere he goes. Whether it’s working as a Tester or in Product or moving towards Management roles, Scott brings his prior experience with him into the next role. So many feathers, not enough room on that cap. We’re going to need a bigger cap! We love that!

Scott’s tech fail (and learning) was filling up his tech team’s plates so much that they couldn’t complete the work within a standard day and honestly, that is a common trap that we see all the time. Many tech leaders are under pressure to get work shipped. As a result, they find themselves running hard at tech releases only to burn out their team resulting in hostility and often turnover. To learn from this, it is important to remember slowing down and looking after your people as a priority can give you bigger and better longer-term benefits.

“It’s more about planning and being able to execute and committing to what you can get done within the standard 9-5 – that’s the goal!”

SEE! We told you there were so many learnings from What’s The Stack and what’s better yet is that we’re currently in the planning stages for Season 2 (you’ve heard it here! Season 2 is coming mid-2022). If you think you or someone you know would be a great guest for Season 2, we’d love to hear from you. Just email us – emily@huntandco.io and carly@huntandco.io

In pancakes we trust,